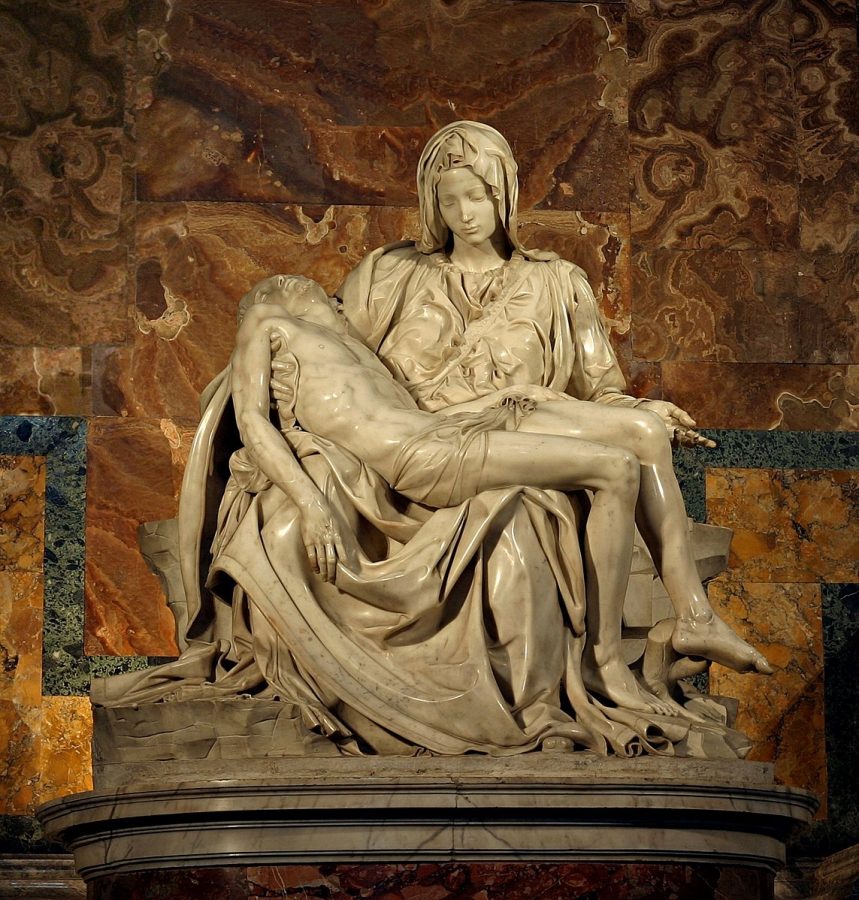 Michelangelo, March 6, 1475-February 18, 1564, is one of the most well known artists of all time. He is known for many things, like painting the ceiling of the sistine chapel in Vatican City and the sculpture of David, but when I think of Michelangelo, I think of La Pieta. As an artist, I have always been intrigued by Michelangelo’s way with paints in the fresco painting style and how he depicts what is painting with a glowing quality. To this day,my earliest memory is seeing La Pieta in St. Peter’s Basilica, Vatican City.

La Pieta is a sculpture depicting Mary grieving of Jesus’s death. Michelangelo’s understanding of anatomy, at this time, was outstanding and it shows through his work. Every bone, muscle, and vein was carefully sculpted in marble in a life like manner with a chisel and hammer. My earliest memory from this statue is looking at Jesus’s hands. I remember the veins and bone structure in his hands. They have bulging veins and the bones on his hands protruding which pays great attention to detail. Unlike other previous portrayals of La Pieta, Michelangelo took a different take on the statue, changing the emotional state of Mary, and the physical state of Jesus. In his presentation of the sculpture, Michelangelo creates Jesus with very little of the effects from his crucifixion except for faint nail marks on his hands, while instead focusing on a sad and broken mother. Mary was created to be watching over her son, waiting for him to wake back up, and come back to life. Instead of making him thin and weak, Michelangelo decided to make Jesus strong and healthy as well.

Michelangelo’s attention to detail on the clothing of Mary was also magnificent, creating something soft and moldable out of a hard material like marble. Drawing draped clothing on a sheet of paper is difficult enough, but the added challenge of a 3D object and without the option to erase or go back is astounding for such detailed work.

This engraving of Michelangelo’s name is written on a sash on Mary. The sculpture wasn’t originally signed.  Michelangelo was 24 years old when he sculpted La Pieta and not nearly as well known as he was later in his life. There were many rumors circulating that Michelangelo had not sculpted it and a rival of his, Cristoforo Solari, had sculpted it and in a rage, he sculpted his name directly across the sash, Michael Angelus, and homage to the Archangel Michael. This he regretted later in life and swore to never sign another piece of art he created.

Michelangelo’s La Pieta is one of his first and greatest works, encompassing originality, detail, anatomy, and emotional depth. He was able to use his knowledge and understanding of the Bible to create a unique and enchanting piece perception of the birth of the Christian Faith. If you ever find yourself in Italy, I highly recommend you take a trip to Vatican City to go see La Pieta along with Michelangelo’s many other works like the ceiling of the Sistine Chapel.