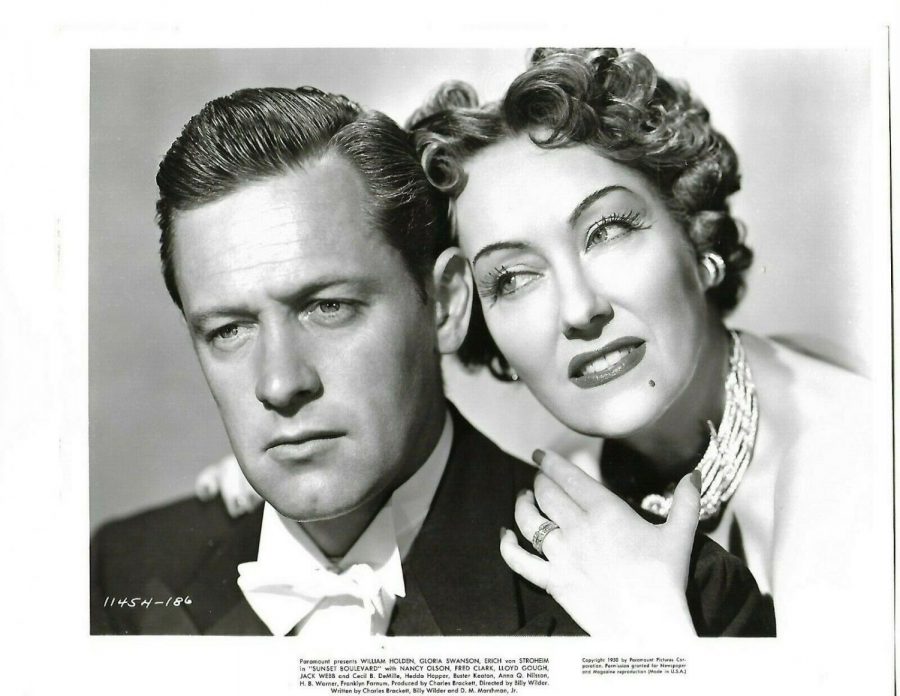 WARNING: This article contains spoilers! Scroll to the end for my basic review.

For my “Screening America: American History and Film” class, we had to write a midterm paper on a movie we had selected from the 50s. The movie I chose was ‘Sunset Boulevard’(based on a recommendation from my parents), but I didn’t love it.

‘Sunset Boulevard’ is considered a ‘dark comedy’, and I definitely see the aspects of the genre in the film. Some moments were particularly funny despite the concerning storyline. The early car chase scene with the men looking for Joe’s car I found hilarious. The irony in the dark comedy is really good. The plot follows Joe as he finds himself in former silent movie actor Norma Desmond’s mansion as she falls in love with him. It’s fairly creepy. Despite being a dark comedy, Sunset Boulevard has multiple aspects of film noir as well. I mentioned the rain and voice-over above, but Norma could be seen as a (insane) femme fatale. She did kill Joe in cold blood.

The movie had plenty of relevant references that I was surprised I got. Miss Havisham from Great Expectations was the first one I got on, as well as King Kong and the monkey (seriously, what was with the monkey). Norma was obsessed with zodiac signs, which is something I see today but wasn’t aware was known in the 50s. The movie also had people playing themselves. Director Demille, for example, played himself. Paramount Studios was excited about the film and insisted on not having their name blocked out, which I’m also surprised about.

There’s a lot about Sunset Boulevard that can be seen in the 50s society and climate. That’s the basic meat of my midterm paper. You can see the different aspects of how television and the Cold War affected society in the film. Norma’s disgust with sound films is directly connected to how television destroyed the former studio movie style (maybe that’s why Paramount was so into having their name in the film). Also, Norma’s constantly lied to, which is how many Americans felt during the Cold War era.

The film itself, however, is completely indescribable. It’s just weird and the weirdness works in certain moments. It wasn’t as engaging as I hoped. I thought Norma was a delightfully dreadful character, but Joe was kind of bland. Maybe that was on purpose. I just could not understand Norma’s obsession with him. There were details that never were returned to (the monkey) and I’m still wondering about them. If anyone knows what happens with the monkey, please let me know. But watching this film was quite the experience.

In conclusion, I’ll just say that you have to watch this film to truly understand what I’m talking about. There isn’t another film like it. Even though I didn’t really enjoy it, I still highly recommend it. It’s one of those films that you just have to see even if it’s not that great.