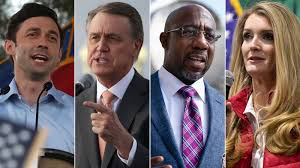 On January 6th, what was once thought to be impossible was accomplished in the midst of national chaos and upheaval: Georgia elected Democrats Jon Ossoff and Raphael Warnock to the Senate, handing the Democrats a 51-50 majority (including Vice President Kamala Harris, the tiebreaker) over the Senate Republicans and ousting Mitch Mcconnell (R-KY) from his Majority Leader position. Due to the inherently racist general election majority rules in Georgia, both Ossoff and Warnock advanced to a runoff against Republicans David Perdue and Kelly Loeffler, respectively; one day after the runoff elections on the 5th, both candidates on the Democratic ticket emerged victorious. At first glance, the fact that a young Jewish documentarian and a Black Baptist pastor were elected in a cherry-red state is both gratifying for non-Republicans and worthy of praise. However, now that the dust has settled and the celebrations have simmered down, it’s time for the Democrats to take stock of what they learned from Ossoff and Warnock’s victories. Without further ado, here are four lessons that the Democratic Party should heed if they want to experience electoral success in the coming years.

State Your Stances…
Both progressive and moderate Democrats have been searching for the answer to one question: will progressive or conservative stances lead Democratic candidates to victory? They can thank Ossoff and Warnock for the answer.
“Do you support the Green New Deal?”
“No.”
“Do you support Medicare For All?”
“No.”
“Do you support DC statehood?”
“Yes.”
“Do you support defunding the police?”
“No.”
“Do you support abolishing ICE?”
“No.”
“Do you support expanding the Supreme Court?”
“No.”
“Do you support ending the filibuster?”
“Maybe.”
After Ossoff’s “speed round” interview on Axios where he revealed that he didn’t support certain progressive policies (such as Medicare for All and the Green New Deal), he was sucked into a heated debate between Democrats about whether embracing progressive ideals or promoting moderation was the way forward for the party. Later that month, Ossoff attracted even more attention when he formally accepted Senator Bernie Sanders’s endorsement, an act seen as an embrace of progressive support. Predictably, the messages from the Democratic party as a whole were mixed: progressives thought that Ossoff’s disdain for their chosen policies was a surefire sign of his impending loss, while comparatively moderate liberals predicted that his tacit alliance with Sanders would doom his campaign.
However, the very act of clarifying his aforementioned stances alone helped lead him to victory. Despite being too progressive for moderates and too moderate for progressives, Ossoff was still able to connect with enough voters in Georgia; it’s possible that this was due to his willingness to share his political views, however controversial they may be. Arguably, his straightforwardness was one of the key differences between his failed House campaign in 2017 and his successful Senate run in 2021. Additionally, Warnock’s opposition to defunding the police (albeit with a caveat that demanded accountability for officers) did not prove to be a handicap during his race; his uncompromising position on healthcare and jobs may have rendered his moderate stance on the police irrelevant. For far too long, Democrats have relied on well-meaning yet unremarkable candidates who fail to commit to any tangible platforms; rather than debating over progressivism and moderation, they should establish one core tenet for all of their up-and-coming politicians: State your stances, regardless of where they fall on the political spectrum.

These four lessons may not guarantee Democratic dominance immediately, but it’s undeniable that relying on grassroots movements, pairing compatible candidates, “fixing” their failed nominees, and promoting opinionated politicians will certainly put them on the path to political success.