Sen. Krysten Sinema Sold Her Soul For Political Gain – And She Did It With A Smile 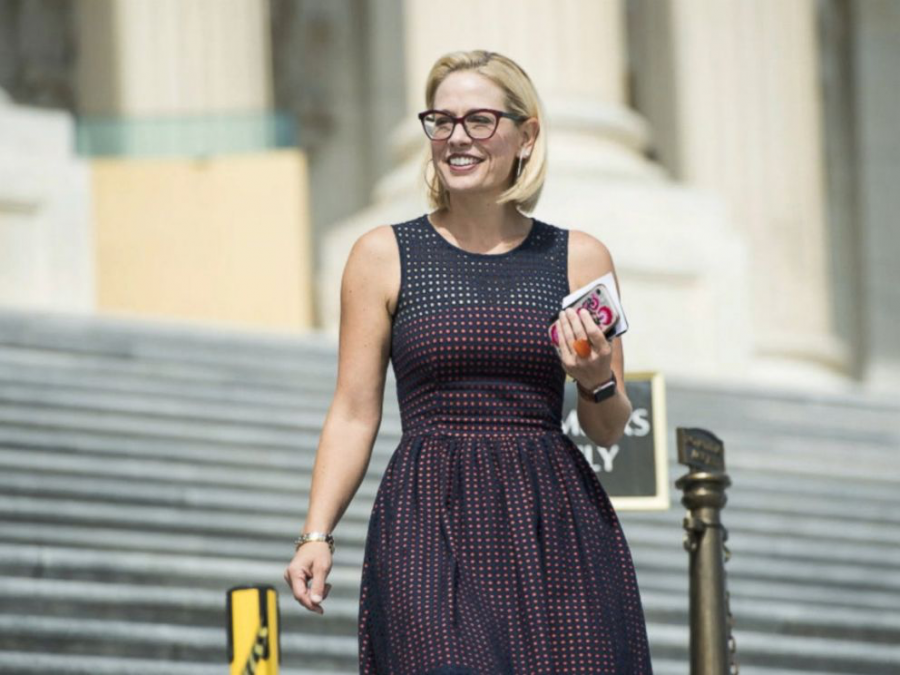 It was truly a sight to behold. Sen. Krysten Sinema (D-AZ), wearing a Lululemon skirt, sleek black boots, and a barely-tamed brunette wig to hide her naturally blond locks, walked through the floor of the Senate. She gently tapped the shoulder of Senate Minority Leader Mitch McConnell (R-KY) in a warm greeting and received the slightest glance in her direction as a response. As she turned to leave, she looked back at him and raised her finger, possibly in an effort to grab his attention for what she was planning to do next. Then, with a graceful yet quirky curtsy, she voted no on the minimum-wage amendment to the proposed American Rescue Plan, thus ensuring that millions of Americans will continue to live in poverty during a deadly pandemic.

To put it mildly, people were (justifiably) angry about her vote. “Sin vergüenza,” tweeted Rep. Alexandria Ocasio-Cortez (D-NY), referring to Sinema’s apparent shamelessness. And from a progressive viewpoint, she’s right. The level of hypocrisy Sinema displays in not only her minimum-wage vote, but her voting record as a whole, is staggering. Sinema and her family were homeless for three years after losing their money and their home; she voted against raising the minimum wage (despite tweeting in support of it in 2014). She publicly came out as bisexual in 2005 while serving in the Arizona House of Representatives; she announced her opposition to abolishing the filibuster in 2020 (which would have made the act of passing the LGBTQ+ Equality Act possible) and stated that she “didn’t remember” the moment when she revealed her sexuality to the entire state. Sinema made her name on fervently supporting the DREAM Act; around the same time as her minimum wage vote, she voted against providing COVID relief to undocumented immigrant families. The list goes on and on. Evidently, each and every time a policy proposal divides Democrats, you can count on Sinema to choose the side that most directly contradicts what she previously believed in and stood for. Sin vergüenza indeed.

At first, Sinema’s numerous heel turns might seem inexplicable and surprising. However, studying her electoral history reveals that it is anything but. In the early 2000s, Sinema played an active role in the Arizona Green party. Along with her campaign to raise the minimum wage, she launched attack after attack against capitalism as a whole: “Until the average American realizes that capitalism damages her livelihood while augmenting the livelihoods of the wealthy, the Almighty Dollar will continue to rule.” However, she appeared to find no success in gaining office, losing two consecutive local elections before switching her allegiance to the Arizona Democratic Party. Only then was she able to gain some ground in Arizona politics; in 2004 (just a few months after her party switch), she was elected to the Arizona House of Representatives and served for years before snagging an Arizona State Senate seat.

Looking at Sinema’s political career after her State Senate stint highlights just how much she changed in a short time. In 2012, Sinema launched a successful bid for the U.S. House seat from Arizona’s 9th district; throughout her tenure, she voiced her support for many moderate stances (including holding bipartisan meetings with House Republicans and the Trump administration, backing immigration policies that have been criticised by Democrats as being too strict, and opposing “carbon taxes” backed by climate activists), joined the conservative Democratic Blue Dog Coalition, and “voted in line with the Trump administration’s known preferences 49 percent of the time,” according to FiveThirtyEight and AZCentral. After serving three terms in the House, Sinema opted to run for Arizona’s vacant U.S. Senate seat. Her campaign ad detailing how she managed to survive poverty “with hard work and help from ‘family, church and, sometimes, even the government’” serves as a stark contrast to her previous criticism of capitalism as “damaging,” and even panders to those outside of her party by echoing the near-universal conservative belief that “pulling oneself up from their bootstraps” is the solution to class gaps and poverty. Overall, the potential reason for Sinema’s drastic rightward shift may be emblematic of what was probably greatest fear in 2004: betraying herself by falling further and further into conservatism for the sake of political power.

So if Sinema has proven herself capable of abandoning her past beliefs and promises in the name of political success, what does her future in the U.S. Senate look like? The answer is unclear. Per Politico, progressive PACs are already scrambling to find another Democratic candidate in the hopes of getting Sinema (and fellow moderate Democrat Sen. Joe Manchin of West Virginia) “primaried” in 2024; however, replacing an incumbent is easier said than done. Besides that initial roadblock, any progressive candidate that manages to beat Sinema might struggle in Arizona, a state which is still largely purple rather than reliably blue. In all likelihood, Sinema will successfully retain her seat (and, consequently, the power that she seems to crave). In doing so, she’ll have the opportunity to betray both the American people and her own past beliefs again – and, knowing her, she’ll do it with a smile and an elegant curtsy.