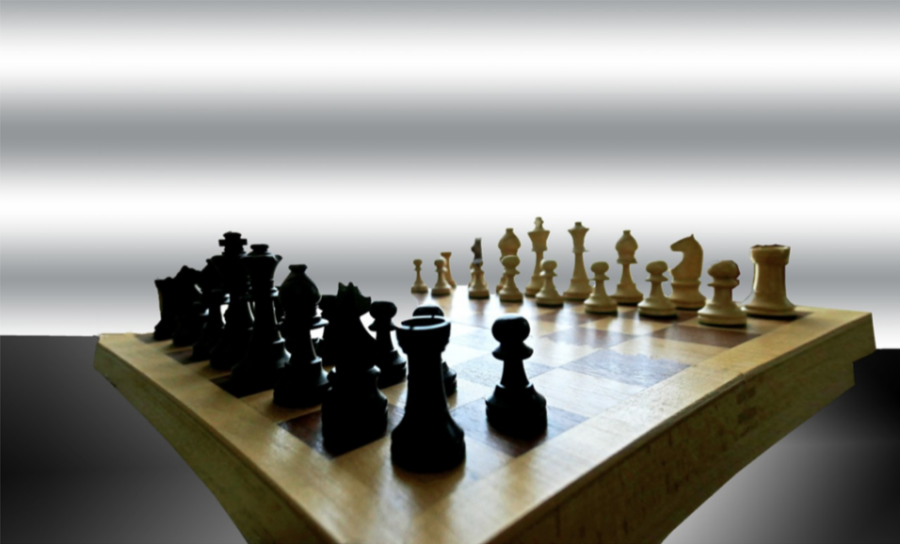 A walk through the entry-level floor of the Kumar Wang Learning Commons would bring one to see numerous sights: the friendly faces of the library staff at the circulation desk, students hard at work, seniors snoozing away their “Senioritis” on the newly reinstalled couches, and recently, nearly every table filled with chess paraphernalia. During Community Time, it’s now common to see hoards of students gathering excitedly around their peers playing the age old game of chess. The clicks of the time clock serve as a soundtrack to the dance the small black and white pieces make across the checkered chess mats. Prior to the COVID-19 pandemic and our switch to alternative models of schooling, the KWLC’s now-familiar green and white chess mats were a rather rare sight to behold. Recently, they’ve become impossible to miss.

It’s quite ironic, in fact, that chess is only of recent popularity on the Friends Academy campus. After all, there is a set of small chess tables built directly into the ground surrounding the Kumar Wang Learning Commons. These marble fixtures which once sat dormant, or otherwise served as lunch tables in the warmer months, have recently been filled with the boisterous spirit of a sports game. Students are eager to best their peers in a friendly round of chess, and certainly have the audience to cheer them on in their usually This recent boom in chess popularity has left many wondering: How did this change come to be?

One must first attribute it to a new overall culture in the Kumar Wang Learning Commons, furthermore all of Friends Academy. With the matriculation of two graduating classes since our last “normal” school year, more than 50% of the Upper School population has shifted. With population shifts come culture shifts and surprisingly, this shift is towards the game of Chess. While the current upperclassmen are used to the chess equipment sitting primarily untouched, the underclassmen are entirely foreign to what norms surround chessboard-usage at Friends Academy. Although it is typically the older students who serve as mode of influence upon their younger counterparts, perhaps the underclassmen have inspired a sense of exploration and change in the minds of their older peers. In creating a new culture around chess, the primarily younger players have inspired those of all ages to try the game, igniting the chess flame at Friends Academy.

Additionally, it is not surprising that students have a newfound interest in a game that involves no more technology than a clock. After spending so much time behind a screen, students have turned to endeavors that won’t blind them with blue light and numb them with immediate gratification. They want tactile experiences that challenge their mind and force them to face others face-to-face. Quarantine has led many young people to rediscover hobbies that may be new to them, but in fact, are skills and games that people enjoyed centuries ago. From knitting to reading the classics to visual art, quarantine provided students an abundance of time to fill with skills that normal circumstances would provide them with too little time to hone.

There is, of course, the influence of a recent pop culture revival of chess playing and culture, inspired by the hit Netflix miniseries, The Queen’s Gambit. Following the story of Beth

Harmon, a childhood chess prodigy who grows up to achieve chess stardom and cope with her personal struggles, the series soared to Netflix’s “Most Watched List” within weeks of hitting the streaming service. It’s not a stretch to say that many students may have developed, or at least emphasized, a desire to learn how to play chess from watching the series. Just like the recent interest in Dalgona candy, a popular Korean street food, popularized by the success of Netflix Korea’s Squid Games, interest in chess has surged everywhere. It would be near impossible for this moment in pop culture to not reach our community in any way.

As relayed by a recent community-wide email from Polly Duke, Head of FA’s World Languages and Cultures Department and Faculty Advisor to the Chess Club, the membership for chess club continues to grow, with students of all experience levels eagerly participating. It is unclear whether this spike in chess interest is a passing craze or a new addition to the culture of Friends Academy, but it is significant nonetheless. The implications of this chess renaissance extend far beyond the 21×21 parameters of a chess board and into how the pandemic and global culture shifts have made their continued impact on our community. Chess has offered our community newfound opportunities for fun, as well as reflection upon how our community has continued to change and evolve amidst our ever changing world.