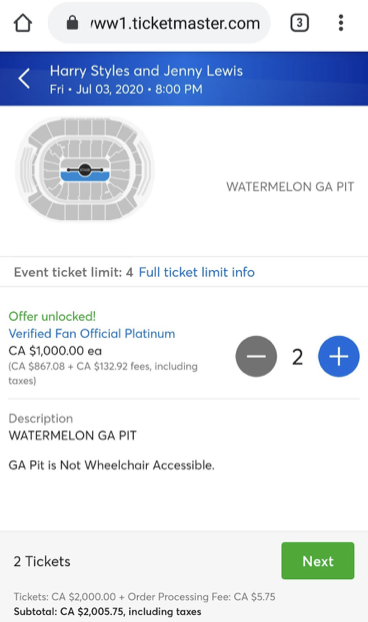 After Harry Styles added his new and final tour date at UBS Arena, fans were outraged by Ticketmaster’s handling of the distribution of pre-sale codes and the sale of their Official Platinum tickets. Many Long Island fans were queuing for hours waiting on their presale codes only to be not offered the code by the time they were able to select their seats. Fans were kicked out of the waiting room and ticket sale room completely, while others weren’t able to even check out after being promised a secured checkout. What’s even worse? Ticketmaster’s Official Platinum tickets, which prices are calculated by market-based pricing and demand, created the biggest issue of all; the prices skyrocketed to outlandish prices.

An upset fan wrote to Ticketmaster,

“This is the first time I’ve ever seen Harry Styles tickets not be sold out immediately after they go on sale. And it’s because [you’re] gouging your tickets. Even resellers are reselling for half the price your trying to sell them for”

Another fan filed a complaint, claiming,

It is safe to say that Ticketmaster has to clean up their act.