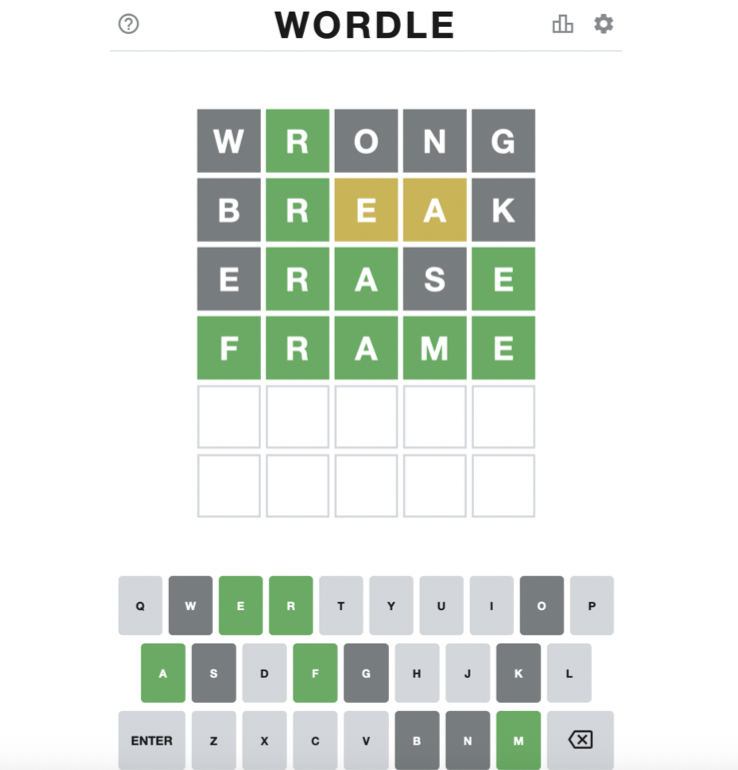 Palak Shah loved word games. Her software engineer boyfriend, who shared her passion for language, began to ask himself, “Can I make a word game that she would enjoy that we would enjoy playing together?” The question was immediately answered with his creation of a prototype for a word-guessing game. The objective – to correctly guess a five-letter word randomly chosen from the nearly 13,000 that exist in the English language. Equipped with an arsenal of programming skills from his job at Reddit, Josh Wardle began to refine the model.

First created in 2013, Wordle remained a niche curiosity that remained within Wardle’s group of friends and family. In January of 2021, the project summoned its engineer for TLC and improvement. After making the game more enjoyable by limiting the set of words to “commonly used” ones, Wardle waited patiently for the internet to take a minor interest in his creation. Instead, he was met with a tsunami of Wordle craze.

So why has Wordle gained so much attention over the past couple of weeks? On the first of November, the site had roughly 90 daily users. By late December, that number had skyrocketed to 300,000. The innocence and purity of the site is widely credited to be the driving factor behind its success. Upon visiting powerlanguage.co.uk, you’re met with the game’s canvas set against a blank backdrop. There are no ads, no push notifications, and no distractions. It’s just you and the game. Wordle’s minimalist design and engaging objective attracted the attention of The New York Times, who have recently acquired the game for a price “in the low seven figures”, Wardle told Time magazine.

Successfully guessing a Wordle is like eating a small blueberry. You march to the kitchen, dig inside the fridge, open up the box, pop the small fruit in your mouth, and in one bite, the sweet blueberry is gone. You crave another, but your mother snaps the container closed and stuffs it back into the fridge. Wordle is a brief moment of amusement that proves antidotal to the mundanity of the working day. Wordle has taken Friends Academy by storm, stirring students and faculty alike to crack the enigma. While the English Department claims to dominate Wordle, the Science Department stands as a worthy adversary.