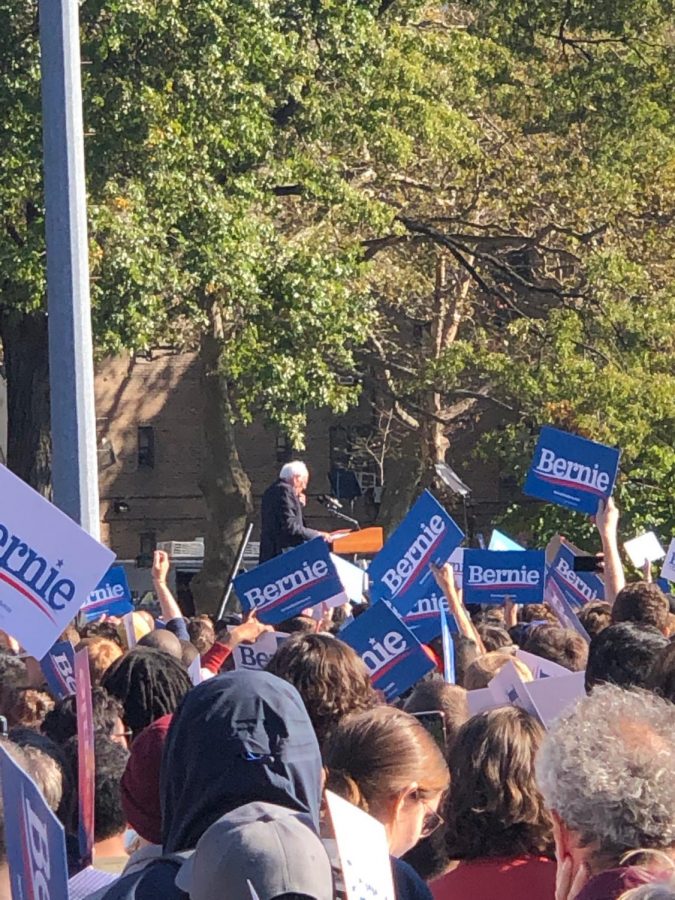 Bernie Sanders is Himself: Here’s Why

WHO?: Bernard Sanders was raised in Brooklyn by low-income Polish parents in ‘4l. After graduating from the University of Chicago as a political science major, he moved to Vermont and worked as a union carpenter and journalist.His political career began in ‘71 when he became a member of the Liberty Union Party. The Liberty Union Party is a democratic socialist political party. He was Vermont’s only congressman in the House of Representatives (and he sure is the king of representation) for 17 years, and onto the US Senate. The significance of Bernie’s history is its humble and political nature. The Daily Mail recorded a Bernie fan referring to him as a “prophet”, simply because many see him as one.

Bernie has many leading vice presidents, who are all women, most non-white. The main, and most discussed one is Kamala Harris. Since Bernie cares deeply for minorities, it’s worth mentioning her race. Kamala Harris is Indian and black and strongly identifies within those, having attended a historically black university and been a part of a black sorority and frequently visiting India growing up. She has the ability to appeal to both progressives and moderates. Having only been serving in the senate for a short time, her debate skills are great.

“I believe our country wants and needs some leadership that provides a vision of the country in which everyone could see themselves.”

DEMOCRATIC SOCIALISM: Bernie has identified as a democratic socialist since at least the 70s. As an American-based school, we’re familiar with democracy- by the people for the people. Without this element, socialism has a rickety past of dictators such as: Karl Marx, Vladimir, Stalin and Fidel Castro. Democratic socialism, however, allows citizens to decide what power they wish to grant to their socially-owned government, within finances and economic institutions.

CAMPAIGN:  Bernie is a big economy guy! He has strong feelings against Wall Street and wants to tax extreme wealth. If you’re interested in this aspect of his campaign, I strongly recommend Netflix- Explained, Billionaires– however, because I don’t seek to plagiarize it in its entirety, I’d turn there. In contrast to how countries such as Finland have eliminated public vs private education, Bernie intends to reinvest on public education. As it relates to education, he’ll eliminate student debt in order to boost the economy, Personally, my close friend’s mother, who’s in her 50s just paid off her student debt. His campaign appreciates that the world isn’t a level playing field, through his enforcement of medicare, free college and decreasing the price of housing. Even further, his social morality- fighting on behalf of the LGBTQ community, women, the disabled and minorities. Judiciarily, he wants to kill race-bias (etc;) and provide all the same level of safety- which he describes as an inherent right. Associated is his desire to make gun laws stricter.

Many of these are self explanatory, but for the sake of your understanding, I’d love to dive into the Green New Deal- a rip off of Franklin D. Roosevelt’s solution to the great depression, but in this case, Bernie’s countering climate change. According to the Daily Mail, about 80% of scientists believe people contribute to climate change and about 50% of typical seminarians believe we don’t. Bernie speaks to the majority that understands our (not so helpful) contributions on this Earth (and I’ll try not to unleash my hippy) through mediums such as fossil fuels. It grants promises to the economy, Bernie’s top subject, like creating 20 million jobs.

As it relates to his democratic socialist perspectives, many fear how many jobs would be lost with the banishment of private property, like many subsequent facilities such as personal advisors. Going back, there was obviously a heavy repetition of the phrase “for all!” This relates to his devotion to those at setbacks that the poor, disabled and many races (because somehow racism still exists) face.

MY EXPERIENCE AT THE QUEEN’S RALLY:

My close friend and I went to the Queens rally on October 19th. We came in on the train, took the subway and divinely integrated into the crowd of those who’d met before. There were many people in their 20s, as well as 40s, who were all smiling and ready to catch us up on newsletters and the functionality of the event. We walked briefly and went onto the field, beside many aggressive Trump supporters who were yelling and cursing at us, which was simply lovely. We arrived during a woman’s speech and later AOC’s (Alexandria Ocasio-Cortez). Everyone was very happy and united- I’ve never seen so many warm faces directed to me in the city. This was my all time favorite moment:

“I want you all to take a look around and find someone you don’t know. Maybe somebody that doesn’t look kinda like you, maybe somebody that’s from a different religion than you, maybe they come from a different country.. My question now to you is: are you willing to fight for that person who you don’t even know as much as you’re willing to fight for yourself?”

Bernie is all love and acceptance, as was every member I met at the movement. We were all excited for the future and hyped up by his words.

I have family who’re equally, if not more obsessed with him- and like many echo, he’s remained consistent since the 70s- which adds to his trustworthiness. I’ve had the same card in my phone for months.