Meme of the Month 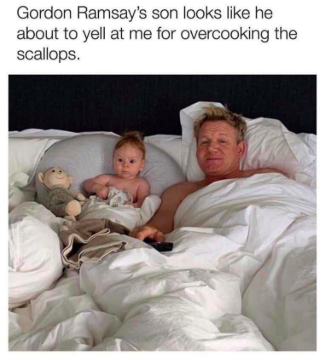 Welcome to meme of the month! Each month we select a meme worthy of a good laugh. What is a meme you ask? An Internet meme, commonly known as a meme (mee-m), is an idea, catchphrase, or piece of media which spreads from person to person via the internet, often as mimicry with humorous intentions. This meme, found while flipping through Snapchat, is one with layers. Gordon Ramsay, famous chef and TV personality, known for his verbal brutality is seen here lovingly with his son. One of my favorite Gordon Ramsay quotes is how gracefully he tells chef Sebastian that “[he] has never ever, ever, ever met someone [he] believe[s] in as little as [him].” An eloquent man whose words warm your heart like a warm cup of coffee or a pure christmas tune. Though the expression on his face is kind, prior to seeing the tranquil smirk on his face we (as the audience) are aware of the level of intensity and crude humor he is known for. So, when we observe the bitter look on his child’s face, we can see the biology behind his visible cynicism. The irony of Gordon’s grin is that he is usually the one with the angered expression, but in the photo it is the baby who seems more eager to throw an insult: making this meme inherently comical.